The (soon to be former) house across the street.

Pretty thoroughly gutted.  The back's even worse, but I didn't get a good shot of that. 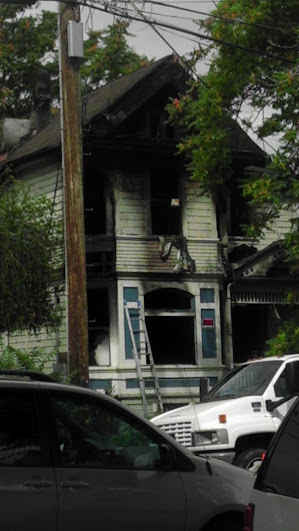 I'm kind of suspicious about the owner's comments here:

"The owner of that house says she was doing a lot of renovations on the house and she had just installed brand new electrical wiring. She planned to start renting it out next week. She believes someone broke in and intentionally started this fire."

It's been "under renovation" for at least five years now, and the most recent activity I've seen is someone repainted the plywood covering the bay window and posted a new keep off sign, and that was several months ago.  I've seen a truck in the driveway maybe once every few months, and I'm pretty sure replacing the wiring would have involved some power tools, which there has been nada of and I work from home three days a week. In fact, a company is currently employing power tools as they board up the place and it's extremely obvious.

Maybe she's just fluffing for the insurance company -- we have a lot of foot traffic in the neighborhood, so 9pm on a weeknight would be an odd choice for commercial arson.
Subscribe

Comments for this post were locked by the author